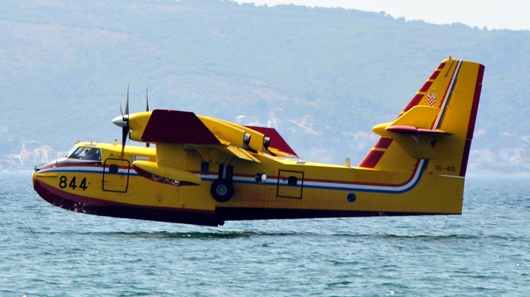 Along with getting an endorsement for conventional gear aircraft, the sea plane license is one of the most enjoyable licenses a pilot can obtain. Most pilots get this as an “add-on” license, after they have become licensed in more traditional “land” airplanes. It is possible to obtain a license from the beginning in only sea planes, but few pilots do this. In that respect, learning to fly sea planes is just like learning to fly, and perhaps not as enjoyable as the transition license.

This article is written from the perspective of a pilot who is obtaining an “add-on” license. To begin with, most land plane pilots incorrectly refer to all planes as “float planes” or “sea planes” which are not technically correct terms and causes serious sea plane aficionados to cringe. It is an esoteric point, but a float plane is a land plane that has been fitted with floats, and a seaplane is a plane that is designed with a watertight hull for water operations. As Cessna 185 on floats is a “float plane” and a Grumman Goose is a “sea plane.” The definitions are further complicated by the FAA license being one for a “sea plane” regardless of the type of plane used to obtain the license.

In strict terms of water performance the sea plane is always preferable to the float plane, but true sea planes are rare, usually expensive and most are rather large, complicated birds. The vast majority of the water flying world settles for float planes because of their relative economy. Both types can be amphibious aircraft and both types can be strictly limited to water operations. Once again, many neophytes just assume all float or seaplanes have wheels for landing on land, and this is not true.

Given the vast majority of recreational float planes as opposed to true sea planes, let’s consider the float plane that most recreational pilots will fly. Once airborne, the float plane will fly like a land plane, roughly, but it will be slower and have less stability. Most floatplanes augment the vertical surface area of the land plane with fins, so it is common to see Super Cubs and Beavers (and others) with ventral fins located on the tail or vertically, from the horizontal stabilizer. Because the floats are long and roughly aerodynamic, they will affect the stability of the plane, along with creating a good deal of parasite drag. A typical Super Cub with floats is hard pressed to fly much faster than 80 mph in cruise as compared to 90-100 mph for the land plane Super Cub. The speed difference can be even more pronounced in other planes. 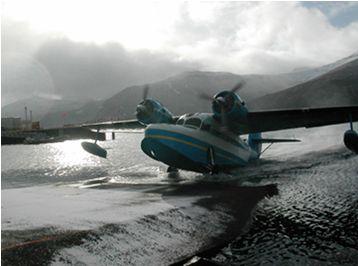 Float plane flying off the water is not difficult. The plane is given take-off power and typically, full back pressure is maintained on the elevator until the plane gets “On the step.” The step being referred to is like a boat, it refers to when the hull is supported on top of the water surface as opposed to plowing through it. Turns can be made while the plane is on the step and is an integral part to most float plane instruction. This allows the pilot to take off from crooked lakes or rivers and is, for lack of a better term, a helluva lotta fun to do. Landings are much like regular land plane landings, except most float planes will have steeper approaches.

Most of the instruction for the seaplane license (whether float plane or seaplane) will deal with water operations and of this, most will be devoted to landing and taking off. One good seaplane practice that differs from land planes (and is not universally followed) is not to fasten seatbelts until just before the take off. This is because if the pilot needs to get out of the plane quickly, for whatever reason, it’s better to be able to jump right out of the plane than it is to struggle with the seatbelt while being submerged. Of course needing to get out of land planes quickly is something most land plane pilots never think about, but it takes on added dimensions on the water. Most pilots are able to make seaplane transitions with 5-10 hours of instruction and many pilots do this while vacationing in Canada, Alaska, or even places like the Bahamas. Assuming one holds an airplane license of some type (other than Student Pilot), no written exam is required.

Finally, we stated that seaplanes are always better on the water than float planes and without going into minute detail, let’s explain. While float planes are undoubtedly capable of water operations, they still sit atop floats. This reduces their waterborne stability and makes them less able to deal with rough waters than their seaplane counterparts. Also, because of the added floats, float planes tend to be slower in the air than a design that was intended to be a sea plane from the start.

Many pilots consider the experience of making a smooth landing on water to be one of the finer experiences flying has to offer. Add this to bush flying and one would be hard pressed to come up with a better recipe for flying bliss.

Watch this extremely short take-off from a lake in Alaska in a Zenith CH701. Not too many floatplanes can get off the water this quick.

Watch these seaplanes come in for landing.