Beech, now Raytheon, has grown into a company that seems to care less about anyone who doesn't have a couple of million bucks to drop on a King Air or Beechjet without worrying about account balance. Beech has always produced upper end aircraft but when Walter Beech was at the helm, Beech also produced planes for the less than the manor-born crowd. By all accounts, Walter was a kind and compassionate company leader, but one has to wonder if he was still alive, whether he'd take the modern corporate types out behind the ol' hangar and serially run a hickory switch over their high-brow patooties. Walter was not the kind to ever put up with nonsense and the planes Beech produced during his tenure reflected this. One of these planes was the magnificent Beech 18, or twin Beech as it is known to many. 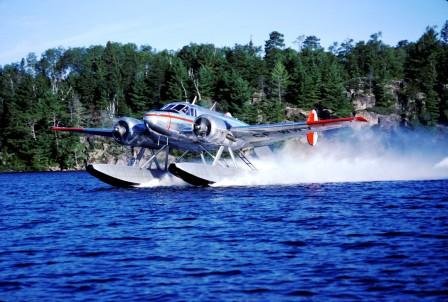 While the Beech 18 was never intended to be for the “budget-conscious” pilot, it was capable of being a perfect, no-frills, bush plane. Because many of the 18s have been snapped up by freight haulers or collectors, it's difficult to find a good example at any less than an astronomical price. Ones that have been beat to death can be had for cheap, but many owners that go this route end up disillusioned with the twin Beech.

The Beech 18 was typically produced as a tail dragger (some have trigear) with two R-985 Pratt & Whitney nine cylinder radial engines. The radials emit a classic pitch as they fly over and one never has to wonder if the plane flying over is a newer Piper or Cessna. Like the Beaver, the 18 emits the sound that just screams for wild and rugged places.

There are few planes in the history of aviation that have more modifications available than the Beech 18. The H tail can be swapped for a modern, single rudder tail, the engines can be swapped for turboprops and the plane can be put on trigear, as mentioned. Of most interest to the bush pilot, the old twin Beech can be fitted with floats.

The old twin Beech also has one of the longest runs of continual production, it was produced in various models from 1937 until 1970, though the last models were much changed from the originals. During the Second World War, seemingly jillions of Beech 18s were produced as C-45s, AT-11s and SNBs for the armed forces. The AT-11 was used as a navigational and bomber trainer and it featured a glazed nose for the bombardier trainees. A famous wartime photo shows the Beech factory producing the Twin Beech and the assembly line seems to stretch for miles. The photo was heavily doctored war-time propaganda, but in any event, Beech made quite a few 18s.

The Beech 18 has spread out throughout the world and has been used in practically every manner it is possible to use such an airplane in. The Canadians even used twin Beechs to take photographs of raindrops in mid-air (pretty much spherical and not tear-dropped shaped as our grammar school teachers maliciously mislead us). Actually, the Canadians were trying to develop better ways to de-ice aircraft in flight so there was a method to their madness, but that's a different story in itself. Twin Beechs have been used as crop dusters, cloud seeders, firefighters, parachute jump planes, survey planes, executive transports—the list is endless.

As a bush plane, the Beech 18 is not as common as others, but it is still frequently encountered in bush country. A float-equipped twin Beech is somewhat rare, but few floatplanes come anywhere close to having the ability of the twin Beech. The only other comparable aircraft would be a float-equipped DeHavilland Otter or Cessna Caravan.

Twin Beechs will cruise at speeds close to 200 mph and will haul eight people. They are not a great short field aircraft, but they can get in and out of tight spaces decently.